Celebrities are contributing their success to Vision Boards?

“Vision Board. Smision Board. (Yes, I know.. that’s not a real word 😉) What does that have to do with real life?  Are you seriously going to tell me if I glue pictures to a piece of paper sh*t is actually going to happen?  Yeah, I’m going to call malarky on that one.  I’ve got a million other things I could be doing than playing with magazines and glue sticks… Unless there’s going to be wine.  Wait, is there?”

Yep, that conversation actually happened. A few years ago when the idea of doing a vision board was first suggested and that nay-sayer? That was ME!

It wasn’t the last time that it was had either.  Only, now,  the roles are reversed and I’m the one singing success stories of manifested goals, fulfillment, and happiness.  It really is the missing link between dreaming and doing!

But why believe me when you could hear it from celebrities!!

Scientifically, your brain is literally making new positive pathways of thinking. Every time your brain learns something the neurons inside of it create a pathway. The more you use this pathway the more it becomes a habit. For example, the first time you learn how to walk it’s hard because you’ve never done it before so you have to create a pathway. The more you practice walking the easier it gets until it becomes second nature. This happens because once a pathway is created it becomes faster for your body to understand the action of walking, the more you practice it the more you master it. [Source]

The same principle applies to any area of life. The more you can see and think about what you want the more focused your brain then becomes on achieving it.  Your brain is an achieving machine! The question then becomes, if you aren’t achieving the things you want in life then WTF are you ACTUALLY focused on? You likely don’t even know.  You just “feel” like it’s out of whack.  Like you keep trying and can never seem to get anywhere or maybe you see some success and then BAM! Something happens and it sets you back and it takes forever to build momentum again.

So why not be intentional in what we focus on? Why not create a scenario where we can purposefully rewrite our brain (or neural pathways) to focus on success.

Let’s be real. A vision board alone is not going to make your dreams come true. But the act of making one gives your mind a clear goal to achieve. The pathway is made. Now it is up to you to determine what’s stopped you in the past, create a belief system around success and put action into the goals you’ve set. 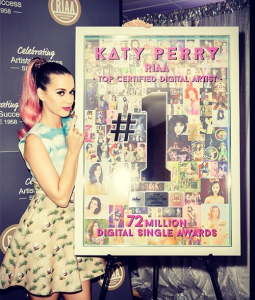 In an interview with MTV in 2009 Katy Perry describes making a vision board when she was nine years old.

She explains that, “Her teacher asked the class to make a “vision board” — a collage of images cut out from magazines that represents the dreams and aspirations you hope to manifest in life. The year was 1993 and Selena had just won a Grammy Award, so nine-year-old Katy chose a photo of the young Latin pop singer holding her golden statuette.” Fifteen years later, Perry was nominated for her first Grammy Award.

John Assaraf  is a successful entrepreneur and brain researcher who built multiple multi-million dollar companies in the fields of Internet software, real estate, life and business coaching and brain research. Assaraf was featured in the movie, The Secret where he credited a lot of his success to making vision boards. The most interesting story: John had been making vision boards for years and made one with his dream home on it. Five years later he realized that he had moved into the exact home on his vision board without even knowing. Check out the video on YouTube where he talks about it!

In high school Solja Boy made a list of all the things he wanted to achieve in his journal.  He says, “In high school, I had this black composition notebook where I used to write down a list of goals: weekly goals, monthly ones, yearly ones, and one for my whole life. In there I had: get a record deal; have a number one song; have a platinum album; get a shoe line and clothing line; invent a dance everyone would do; get my mom out the hood; even little things like get a real watch or do all my homework. One day, I left the notebook in class and this dude found it. He read it out loud in front of everybody when I wasn’t there, trying to embarrass me. Mark my words, a year later, everything in that book had come true. I got the last laugh.”

Queen B has a picture of an Academy award right near her treadmill that she looks at daily so she can keep her goals literally right in front of her. Dreamgirls, featuring Beyonce as the star?? Nominated for an Academy award!!

If you’re like me you want to hear just the good stuff….Skip to about 2:10 in the video below to see her talk about it.

There’s an episode of the Ellen show were she shows the audience her vision board about her dreams of being on the cover of Oprah’s magazine. For nearly every issue Oprah had been the cover girl, and then Ellen got her dream.

Don’t take my word for it! Hear it from the horse’s mouth…Not once…but twice!

(because let’s face it… She’s a God for making my lumps look smooth!)

Sara Blakely, creator of Spanx, talks about using visualization to become successful in a speech at the Women’s Leadership Exchange. Blakely explains that her goals were, “To be self-employed, invent a product that she could sell to a lot of people, and to create a business that would be able to fund itself.” She wrote her goals down and they became reality.

Flash back to beginning of this post… when I asked “Are you seriously going to tell me if I glue pictures to a piece of paper sh*t is actually going to happen?”

What do YOU think?